This paper assesses the possibility of permafrost occurrence in Iezer Mountains using field observations, GIS analysis and thermal investigations in the field. Rock glaciers as the main mountain permafrost footprint in the landscape are mapped using cross validation from two independent inventories, analysed and classified in terms of size, altitude, morphology, air temperature and vegetation cover. Measurements of spring temperatures, bottom temperature of snow (BTS) and continuous (near) ground surface temperature (GST) were applied to check for permafrost presence. Autumn temperature of 20 alpine springs are analysed and grouped by their source, temperature and apparent discharges. BTS was applied on 3 sites from the upper part of Colților Valley in 2012 and 2018 along GST in Tambura scree in 2012–2018 period. 16 rock glaciers are considered to exist in Iezer Massif, a much smaller number than previously assumed. We argue that several other landforms are rock–ice features and should be inventoried and analysed in corresponding with minimal past permafrost creep. Rock glaciers are poorly developed and have a faded morphology because of low debris availability, short periods of time with favourable climates and less supportive mountain morphometry. Alpine springs indicate possible permafrost occurrence in one rock glacier and one talus slope and BTS reveal sporadic patches of permafrost down to 1900 m asl in Colților Valley. GST supports the multiannual stability of permafrost indicating BTS on a multiannual scale and suggests the great importance of autumn–early winter temperatures and snow interplay for ground cooling and permafrost maintenance. We argue that 11 rock glaciers from Iezer Mountains are probably inactive. MAGST of 1.1 – 3.2 °C suggest a strong thermal gradient in the blocky layer if permafrost is truly present. Alpine screes possibly underlain by permafrost seem not to be disturbed by any modern climate changes. 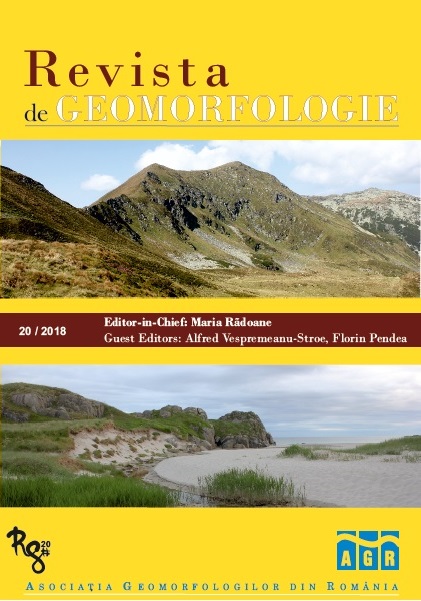