Historical geomorphic analysis of Someșul Mic River (NW Romania) channel spatial and temporal behavior, as a background for the assessment of present day morphological state of the river

In the context of the increased interest on integrating the complex spatial and temporal response of fluvial systems to human impacts into the process of assessing the ecological state of the rivers and in promoting a sustainable river management European countries have developed a multi–scalar, hierarchical, process based hydro–morphological framework focused on understanding the river functioning and evolution as a basis for interpreting current conditions. In this context, the goal of this paper is to demonstrate the usefulness of systematic historic and present day geomorphic analysis along channel reaches with distinct typologies in order to generate a better image of river morphology as a background for assessing its present morphological state. The historical geomorphic analysis of Someșul Mic River’s channel dynamics during the past 250 years has shown that the main controlling factor is climate through its centennial – decadal scale variations in magnitudes and amplitudes of flood events, while the local geological conditions and hydrotechnical works having subordinate effects. The reference condition in assessing the present day morphological state of the river was defined based on channel typology and dynamics between AD 1860 – AD 1970, reflecting a river state far from a pristine condition, but characterized trough human impacts maintained bellow the river sensitivity to disturbances. The Morphological Quality Index (MQI) was calculated for 17 distinct channel reaches. Its values indicate the high geomorphic degradation of the river induced by hydrotechnical interventions along the channel. Very poor conditions are concentrated mainly along the upper reaches of the river, while further downstream the river is in a dominantly moderate deterioration state. The resulted image has the potential to better identify the critical reaches along this river, and the main disturbatory elements acting on them, in order to support better projections on possible channel trajectories and
subsequently river management actions. 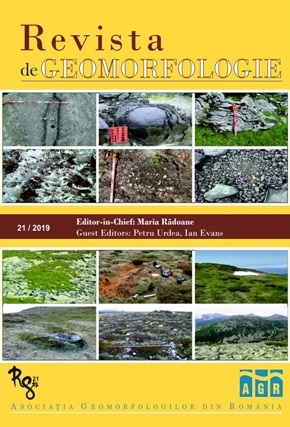